Memphis Statement:
I came to Memphis because of an ex…but I stayed in Memphis because of Rhodes and because the city immediately felt like home. I made some amazing friends in the music scene and went to some awesome neon-filled living room dance parties. I changed my major from poetry to studio art despite my mother’s great discontent. I got lost in the sculpture studio behind those gates surrounding Rhodes and really found myself within and beyond them. Local artist run spaces like Odessa and the thriving music scene became safe places to explore ideas and identity. The work I’m doing now is still closely related to the work I was making while at Rhodes. I made a lot of important decisions in Memphis; I guess you can say Memphis sculptured who I am today.


Bio:
Inspired by space operas, pop culture, geometry and the setting sun, Esther creates objects that operate simultaneously as miniature landscapes from a distant future (“A planet with neon cosmic dust rings and a triangular shaped moon, which align perfectly as they slip away from the sun…”) and actual size sculptures informed by the family of Minimalism. The cylinder, the semicircle, the triangle, and other Euclidean forms are combined into colorful and expressive freestanding sculpture. She tops cast cement columns with Plexiglas triangles, neon arches and fractured geodes in a way that leaves viewers thinking of (among other things) Dan Flavin, Pink Floyd and the stark beauty of the desert.
The newer works, shifting away form the cylindrical forms, but still adhering to a strict material diet, act as objects from these landscapes. Some act as tomes, containing foreign information; others as stand-ins for familiar domestic objects but with fundamental idiosyncrasies. The series of Wells, began in 2014 as wormholes or portals to these other worlds.... more on profile: http://www.memphis.edu/amum/exhibitions/stoppinginmemphis.php 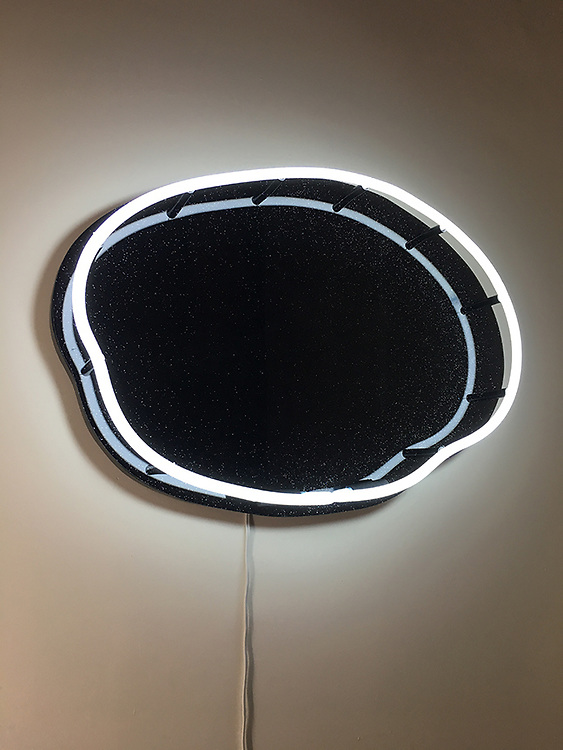