State audit bureaus actively work to eradicate people who steal state property, who ignore the complaints of the common people about the bureaucracy, and who try to silence the criticism--vices rampant in the Soviet Union.

o A bureaucrat, squeezed in the red fist of the party-state audit bureau, grabs for a pile of cash or BRIBE.

o In the group below one person grabs the bureaucrat and carries a SAFE on his back.

o Another holds a REPORT and blows out numbers from nowhere or doctored official statistics.

o The man with a fountain-pen holds a sheet of paper with the word SLANDER (symbolizing slanderous petitions to various state offices).

o At the bottom of the pile are a drunkard with a MOONSHINE bottle in his basket, a man with a SILENCING CRITICISM lock, and a bureaucrat with a leather case containing COMPLAINTS OF LABORING PEOPLE--complaints about living conditions and corruption.

o In the middle a corrupt food store salesman holds a set of scales. No words are necessary. There were no privately owned stores in the Soviet Union and food store salespeople were notorious for their corruption. By tinkering with the scales when weighing food, salespeople could accumulate and sell extra food on the black market. 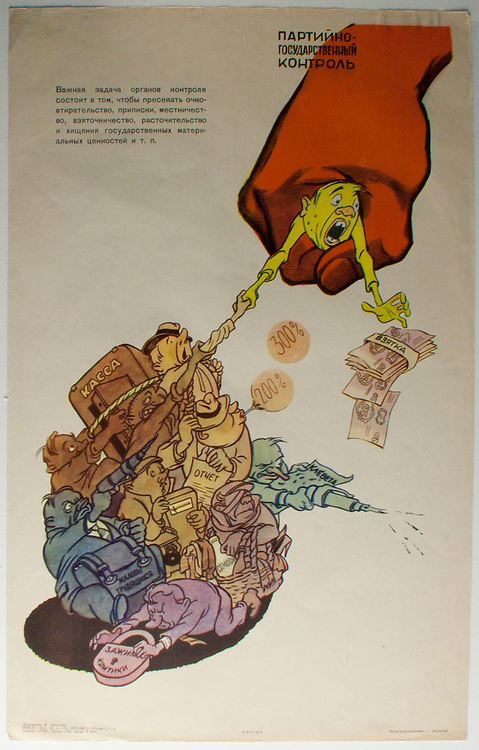